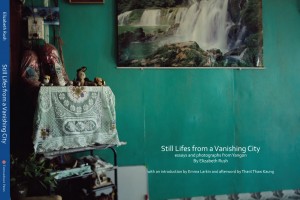 Buy it on Amazon!

Here is what Emma Larkin has to say about it: “Elizabeth made good use of the strange days just before this awakening to venture into the lost world of downtown Yangon, but it was not the large edifices of Empire that attracted her attention. Rather, she focused on the shop houses and private residences that line the alleyways and it is here, in these forgotten and secluded spaces, that the city’s real secrets have been kept. After all, it was not – in the bad old days of the Burmese regime – just those who were overtly political who had to succumb to the silence. In a world where anyone accused or perceived of being on the wrong side of the regime could end up in prison with no legal recourse, people turned inwards by necessity. Only behind closed doors was it safe to indulge in private obsessions and the day-to-day worries of making ends meet. Elizabeth’s essays and images capture the interior lives diligently maintained despite the dictatorship’s powerfully effacing reach.”